Jakarta, 1/5/2020 (Antara) - As Indonesia battles the novel coronavirus disease, another health threat looms for the tropical nation with the change in season that of vector-borne diseases such as dengue fever and malaria.
In the transitional period from rainy to dry season, which the country is currently experiencing, there is usually a high prevalence of both dengue and malaria, which translate into high morbidity and mortality for many patients around the world.
The main mosquito vector of malaria is Anopheles, whereas dengue is spread by Aedes aegypty. Dengue occurs year-round in Indonesia, with peak transmissions in the rainy season, from November through April.
Achmad Yurianto, the government spokesperson for COVID-19 response, has repeatedly urged the Indonesian people to remain vigilant against dengue.
"Combination of dengue and COVID-19 infections could be fatal for the health system," Yurianto, concurrently the Indonesian Health Ministrys director general for Disease Control and Prevention, said on April 29, 2020.
Moreover, dengue fever and COVID-19 are difficult to distinguish because they share clinical and laboratory features. There have been cases which were wrongly diagnosed as dengue, but later confirmed to be COVID-19.
Hence, as people practice social distancing by staying at home, he called for ridding homes of rubbish and destroying mosquito-breeding grounds, including clogged drains and unkept compounds.
In every house, office, school, and other public places, it is necessary to form a Jumantik, or larvae monitor, to ensure there are no mosquito larvae. If found, it needs to be destroyed immediately because environmental factors greatly influence the development of mosquitoes, Yurianto advised.
Stay at home and destroy mosquito nests, he reiterated.
Based on data from the Indonesian Health Ministry, the country has recorded 49,563 dengue cases and 310 deaths in the January 1-April 27, 2020 period.
Of the total cases, West Java has reported the highest number of infections at 6,337, followed by Bali (6,050), East Nusa Tenggara (4,679), Lampung (4,115), and East Java (3,715).
Forty-eight people have died of dengue in East Nusa Tenggara, 39 in Central Java, 33 in West Java, 31 in East Java, and 17 in Lampung.
During a recent visit to Kupang, the capital of East Nusa Tenggara, Doni Monardo, chief of the Task Force for the Acceleration of COVID-19 Response, urged the provincial government to remain vigilant for dengue fever outbreaks.
"We need to remind the NTT government to not only focus on COVID-19 cases, but also to anticipate the emergence of dengue during the transition season," said Doni Monardo, during a teleconference with the Deputy Governor of Nusa Tenggara, Josef A Nae Soi.


Monardo also called upon local authorities to remind local residents to maintain cleanliness in their homes, gutters, wells, and bathrooms, where disease-carrying mosquitoes reproduce.
"The community must routinely clean up their respective environments so that NTT inhabitants are free from dengue fever outbreak," said Doni.
Earlier, deputy chairperson of the People's Consultative Assembly (MPR), Lestari Moerdijat, had urged the government to give serious consideration to the recent spike in dengue cases in the country.

"I understand that the government is currently facing complex and severe health issues, particularly the COVID-19 outbreak. But, the trend of increasing number of dengue cases should not be ignored," she said.
Lestari Moerdijat called for vigilance as the death toll from dengue was quite high last year, with the country recording 354 fatalities.
The politician from the National Democratic (NasDem) Party also asked the government to ensure there is adequate hospital capacity for patients suffering from the novel coronavirus disease as well as dengue.
Several neighborhood communities across regions have been conducting monthly mosquito fogging to stem dengue, which mostly affects children.
Amid the COVID-19 pandemic, malaria is also a threat, particularly in eastern Indonesia, which is a malaria endemic area.
The government is trying to prevent an increase in malaria cases during the COVID-19 pandemic, Siti Nadia Tarmizi, the Health Ministry's director for the Prevention and Control of Zoonosis and Vector Infectious Diseases, said recently.
Like dengue, malaria also has symptoms similar to COVID-19, such as fever, headaches, and muscle aches, and its treatment procedures refer to the COVID-19 prevention protocol, she noted.
"Malaria sufferers can be infected with other diseases, including COVID-19," she said.
Siti Nadia Tarmizi called for increased vigilance as the current spread of COVID-19 has expanded to malaria endemic areas, especially in eastern Indonesia, such as East Nusa Tenggara, Maluku, and Papua.
Hence, it could cause a double health burden, she pointed out.


To protect health workers from coronavirus, the standard COVID-19 prevention protocol prescribes the use of personal protective equipment (PPE) by those treating malaria patients.
Siti Nadia Tarmizi also reiterated the need to practice physical distancing, wear masks, wash hands with soap, and avoid crowds of more than five people, as well as use of mosquito nets to avoid mosquito bites.

Regional health authorities must monitor and anticipate malaria , and make sure the stock of anti-malarial drugs is adequate for the next two to three months, she added.

The Indonesian Government aims to eliminate malaria in 405 districts and cities by 2024. The 2020-2024 period would be a decisive period in the effort to achieve a Malaria-Free Indonesia by 2030, she pointed out.

"Most of the cities in Java and Bali are already malaria-free, she noted. 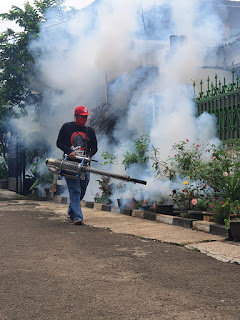